Shop For New or Replacement Switch

Since Zoeller is very popular and is the plumbers and contractors preferred brand, we are providing the following information to help you understand more about the Zoeller float switches.

The tethered float switch has a tether with a float at the end. As the water rises so does the float. When the float it extended out the switch is triggered to send power to the pump to operate.

If the float should ever fill with water, it will sink to the bottom and not operate.

Many homeowners like to extend the length of the tether as much as possible so more water leaves the basin every pumping cycle; however the longer the tether the larger the pit diameter must be and the more potential there is for float hang-up.

A puncture of the float cannot cause the pump to fail because the float is buyoant and solid. The two pole float cannot get hung up or caught. The float also has a top protective guard for additional float protection.
Over time the float-switch will require replacement.

The switch is C shaped. The rod for the float rises as the water causes the float to rise; when the rod hits the top of the C shape it turns the pump on. When the water lowers the float and rod lower and the switch goes off which causes the motor to shut off.

Over time the switch wears. As it wears it causes arching. Arching and switch wear causes the switch to fail. Obviously if the switch fails, the pump-motor will not work.

What Zoeller Has Done To Improve The Switch?

Zoeller has upgraded its vertical switch to an electro mechanical-switch which has an electronic component which carries a small charge (current) which activates the pump. This reduces wear and tear and thus extends the life of the switch. Unfortunately this upgraded switch is only found on the M63 and the M95 which have a 5 year warranty.

The variable level float switch manufactured by Zoeller is used for non-automatic pumps (the pumps that have no float-switch to start and stop them; they keep running unless the pump cord is pulled). They are easy to install and replace since they are independent of the pump. The variable level float switches are installed by attaching them to the discharge piping system.

All manufacturers float switches will eventually fail. Float-switch failure depends a lot on how often the sump pump runs. If the pump runs more than once a day and continuously during heavy rainfalls you can expect the switch will last three to five years. If the sump pump rarely runs the switch will last much longer. Some homeowners report their switch has lasted ten years.

The Zoeller pump housing and motor will outlast the switch. The housing and motor are build to last almost forever. In fact, only eightly percent of the motors capacity is used during a pumping cycle which results in motor longevity.

Most of the time the float-switch will fail during heavy continuous pumping; therefore it is wise to replace the switch every three to five years depending upon the frequency of usage ton prevent flooding. The smart homeowner will keep a replacement switch on hand. Replacement of the switch is easy. Follow the replacement steps below.

The replacement switch part number #004892 is made by Zoeller; therefore it fits perfectly any of the series 50 and 90s sump pumps. The switch is easy to replace. See switch installation instructions below.

The Zoeller float switch is easy to replace. If the pit is dry and the four screws holding the pump head turn, it may be possible to loosen the screws and replace it without removing the pump from the pit.

The following steps define how to replace a failed float-switch.

1. Empty the contents from the replacement parts package.
2. Unplug the sump pump.
3. Remove the check valve.
4. Remove the pump from the pit
5. Drain the water from the pump.
6. Remove the four screws on the top.
7. Remove the head unit and place on side of pump..
8. Inside the pump head, on the left side see the switch. Take off the steel stabilizer bar. Take out the switch
9. Take a picture of the wiring connections to make it easier to rehook.
10. Unhook the two white wires from the head.
11. Remove the gasket. Clean off any residue.
12. Remove the arm from the top of the float if necessary.

13. Replace the float. May use the old bar if in good condition.
14. Put the gasket on.
15. Hook the wires back up. The black wire comes from the pump and gets hooked on the top connection on the head. The white wire comes from the switch and gets hooked on the housing body.
16. Put the Zoeller head back on. It may take a little time to get the four screws to line up.
17. Sump Pump screws, guard and handle are stainless steel. Stainless steel will not rust and has strength.
18. Plug the pump in.
19. To test the new switch hold the float bar down to see if the motor will run.
20. Put the white screw back in the side of the pump by the handle.

The replacement gasket part number #034046 is made by Zoeller and fits Models Mighty-Mate M53, M55, M57, M59, Flow-Mate M98 and Waste-Mate M264. We have replaced our M53 gasket once. Our M63 is 12 years old. The gasket is very easy to replace. Just open four screws, remove the old gasket and replace it with the new. The gasket fits perfectly.

The replacement float rod part number #054062 is manufactured by Zoeller.

The replacement float part number #034019 is manufactured by Zoeller. The floats found on the automatic pumps are unsinkable if they are punctured because they are buoyant solid polypropylene. It is highly unlikely that the float will need to be replaced.

Zoeller manufactures check valves. They are highly rated by consumers and are easy to find online.

Zoeller makes many check valve styles ranging from those that slip on both ends of the discharge pipe and those that are glued on. Sizes also vary from 1 1/4 inch to 2 inches.

Zoeller check valves are very reasonably priced ranging from $9 to $30.

When sump pump float switches fail, if no battery system exists, the basin may overflow. A high level water alarm alerts the homeowner when such a condition exists.

Zoeller manufacturers two water alert series. They are the A-Pak and the Aquanot Flood Alert.

The Aquanot Flood Alert Series uses three AAA batteries. Stainless steel is used for the sensor contacts. The alarm can be installed as is without adjustments. The alarms are made of solid-state electronic components, have a five foot lead wire, and have an AC power adapter capability (Class 2 transformer, Type B Plug).

The Aquanot Flood Alerts has a 103 decibel horm to alert the homeowner when the sensors are contacted by water and when the alarm batteries are low. There is an on/off silence button to silence the alarm.

The A-Pak Alarm System has terminal connectors for a pump and a float-switch. It can be used indoors or outdoors. Its horns is rated at 86 decibles. When there is a high water condition a light will come on. There is a auto reset button to test or reset the alarm. The standard float-switch cord length is fifteen feel with a six foot power cord. It has a 9 V battery backup feature. The model number is 10-0623

The auto dialer uses voice chip technolgoy. It can be used with any device that can provide a normally open/closed contact including telephone (voice tone or pulse not digital), most cell phones, and pages. Four numbers can be stored. Each contact number is dialed up to four times. A sixteen second pre-recorded mesage can be created by the homeowner. An internal 9V battery backup is included. The model number is 10-2616

(Click QUICK SHOP to shop Zoeller Product Categories; Scroll down the page to see all.) 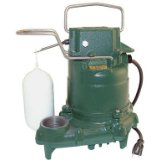 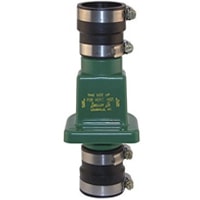 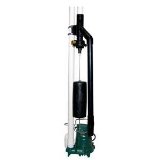