Learn How To Replace Float Switch

No switch lasts forever. Manufacturers expect a float switch to last from three to five years depending upon how much it is used before the switch needs to be replaced.

Seeing how it is done makes it easier. Learn by watching. It is not as hard as it sounds. In fact now that we have done it we say it is easy. Take advantage of the video and try it yourself.

Wayne Pump Company shows how to replace a float switch tcp. Learn by watching. It is not as hard as it seems. Try it on a sunny day and find success. Doing it once will give you confidence for the next time.

Replacing the Ridgid Float Switch is easy. Learn by watching. See how easy it is.

If you have a tether float switch the following video can be applied to you brand because the steps are similar.

The Hi-Lo HC6000 is an electronic switch with probes used to monitor the low and high point of water in a sump pit and trigger the sump pump motor to begin operation when the preset high point of unwanted water in the sump pit reaches the top probe.

The concept of its operation is the same as a conventional sump pump float switch. However, instead of having a vertical float or a tether float that moves up and down as the water rises, the height of the water is monitored by probes. The probes remain stationary (attached to the discharge pipe). A signal is sent to the electronic switch when the bottom probe touches water. The circuit is complete when water touches the top probe; at that point the sump pump motor is activated. 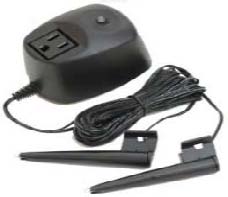