PumpsSelection.com -- The Helpful Pump Place
Protect Your Basement With The Best Sump Pump

By comparing the GPM of a Zoeller 1/2 HP with manufacturers of 3/4 HP  (Wayne, Superior, Ridgid, Watchdog, Flotec, Simer, Flint Walling/Star) you will discover that a Zoeller 1/2 HP GPM is the same as the 3/4 HP. Zoeller pumps are more efficient. In addition Zoeller motors only run at 80% usage with 20% in reserve.

By comparing the housing of cast iron sump pumps you would think they were made equally. However, just because the housing is cast iron, only Zoeller has cast iron volute and impellers. Cast iron is more durable.

By comparing vertical switches you would think they all function the same. However there are two types of vertical switches - mechanical (manual) and magnetic. Flint Walling/Star and Liberty use magnetic switches which are more reliable.

Not all pump bodies are the same. Liberty Pumps is unique with a unibody (one piece body) which eliminates the need for an additional bottom seal.

Comparison of clog prevention design also show differences. Many use a bottom screen to prevent debri from entering the impeller such as Basement Watchdog, Simer, Flotec, Ridgid, Little Giant and Superior. Wayne uses top suction. Liberty and Zoeller use a vortex impeller which actually handles up to 5/8 in solids eliminating the need for a bottom screen.

By comparing the basin size required by manufacturer you will discover that some sump pumps are taller and narrower, while others are wider and shorter. Also those with a tethered float switch require more pit room.

Zoeller is known as the professional plumbers choice. Zoeller uses the highest grade of cast iron for their submersible pumps.

The Little Giant is known for its use of the diaphragm rather than a float-switch.

Wayne is known for its innovation. Some new features are successful and other s are not like the Switch Genius technology which uses a microprocessor (probe- water sensor) instead of a float. The idea was great however the probes were affected by calcification found in ground water. Stak Enterprises has been successful with their electronic switch with probes technology which is not impacted by water chemicals.

Superior pumps are made with removable float switches so they can also be used as utility pumps.

Ridgid is manufactured by Wayne. Their models include tether and vertical float switch.

Myers is trademark of Pentair Water known for many types of water solutions. Their model has antilock hole in volute base and pump is very serviceable.

Liberty is known for its one piece unit eliminating the motor seal ring. It also has a quick disconnect power cord and some of their pumps use a vertical magnetic float switch.

Flotec and Simer are known for offering Lifetime Warranties on their 3/4 HP submersibles with pump housing made from stainless steel.

Flint and Walling is a Zoeller company. Their pumps are shaped with a fin type body housing to increase efficiency.

Red Lion and Zoeller floats are solid so punctures will not cause float switch failure.

Liberty, Zoeller, Wayne, Watchdog (Glentronics), Flotec, and Red Lion manufacturer combination sump pumps. The combination pump comes preassembled with a primary submersible pump and a battery backup pump. These preassembled pumps are easy to install. Of course knowing the diameter of your pit is important to determine if it will fit into your pit.

Superior, Liberty, Wayne, Watchdog (Glentronics), Zoeller, Little Giant, Flotec, Simer, and Hydromatic mnaufacturer battery backup sump pumps. Pedestal sump pumps are easy to maintain because the battery sits above the basin and never is submersed in the water. The float is easy to replace.

The most recent Liberty Pumps innovation includes the Night Eye which provides wireless connection to smart devices anywhere in the world. The Night Eye WiFi connectivity can be used with the Sumpjet SJ10A-Eye (Water Powered Backup Pump), The StormCell 442-10A and 442-25A-EYE Battery Backup Sump Pumps, and the Combo Pumps (PC257-442-EYE, the PC237-10A-EYE, and the PC457-442-10A-EYE). The battery backup system (441) has also be upgraded to the new system 442.

The Basement Watchdog Battery Backup Systems have been modified to allow the usage of the GW27AGM Maintenance Free Battery.

We have done the work for you on over 160 sump pumps. 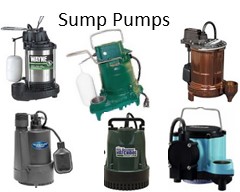 Primary Submersible Sump Pumps act as the main pump in the basin; therefore finding the best pump is very important. We provide help for you to determine what your water pumping needs are, so you can make a wise selection. There are many brands, models, sizes by horse power, performance capabilities by gallons pumped per minute, float switch types, clogging prevention designs, and pump housing materials. Select the best pump to keep your basement from flooding.

Learn More About The Primary 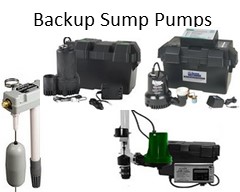 Backup Sump Pumps are a necessity since your electricity and primary pump will fail sometime during a rain storm. Rather than deal with a flooded basement, it is more cost and time effective to install a backup. Many performance capabilities, battery sizes, alarm types, footprint sizes and power source options are available. Select the perfect backup pump for your situation.

Learn More About The Backup 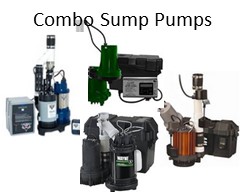 Combination Sump Pumps come preassembled with a primary pump and a battery backup. These combination systems come preassembled so all you have to do is align the combination systems discharge pipe to your existing discharge pipe in the sump basin. There are many brands, models, footprint sizes, horse powers, clogging prevention designs, pump housing and performance capabilities by gallons pumped per minute. Find the best pump for your water pumping needs.

Learn More About The Combo 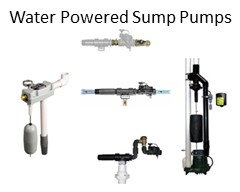 Water Powered Sump Pumps are a good solution if you have long power outages during heavy storms such as hurricanes. City water is required and available during power outages because generators keep the city pumps running. Water powered pumps are also the preferred choice for homeowners who do not want to rely on battery power. Discover if a water powered system is best for your water pumping needs.

Learn More About The Water Powered 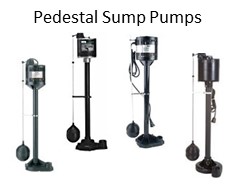 Pedestal Sump Pumps are easy to maintain because the pump motor and float switch sit above the basin and therefore are not submersed in the water. The number of brands and models is limited; however horse power and performance capability for pumping gallons per minute vary. Find the best pedestal pump for your needs.

Learn More About The Pedestal 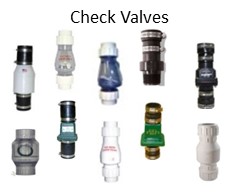 Check Valves are an important part of any pumping system. They prevent the motor from having to re-pump water flowing back down the discharge pipe when the motor stops. They can also lessen the sound of water hammer. There are many brands, styles and end connector types. Select the best check valve for your needs.

Learn More About The Check Valve